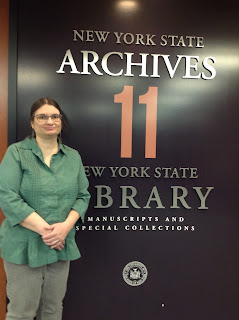 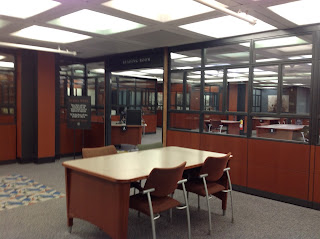 Parking: This will take you to a map and information on parking near the library. I have had good luck with the Cathedral parking lot whenever I have visited the library.
Hours:

Monday through Saturday, the doors to the building open at 9:30 in the morning. Upon entering, you are in a large room with information and guard counters as well as kiosks with information about Albany including bus schedules. At first it can be confusing as archways lead off in all directions. If you have time, feel free to explore through these arches—they are parts the New York State Museum which is free admission. In the northeast corner is the museum gift shop, which among other items, sells many books about the history and culture of the state.

Walking towards the back, you will see a desk for the security guards of the building. On either side of their area are banks of elevators. Turn towards the right and you will see these are marked with the various public floors. The Archives are on the 11th floor.

Does this information sound familiar? It should, the above was taken almost word for word from my previously write-up of the New York State Library and for very good reason. Although two different places, they are in the same building and take up much of the same space. 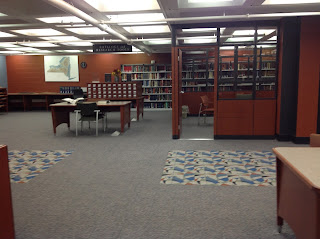 The archives have many restrictions, but don’t fear. They are also very happy to guide you through what you need. The registration process is very quick and simple; just make sure you have an official picture identification with you- probably your driver’s license. Once you register, you’re good for the year.  There are lockers available to stow any of your stuff that you have along and can’t take in with you. The pictures on this post were taken in the archives with just one stipulation- I was not allowed to take any pictures of people. Luckily, it was just about noon and not many people were working there at the time!

Once you are registered, you will be assigned a table in the archives. Shortly, the items that you requested will be brought out to you. On my most recent trip, I had so many items I was looking for in the library, that I did not plan any time to use the archives. However, in the past I have looked at various manuscripts that people have prepared about families that I am interested in. Some were family trees, and some were letters and such. 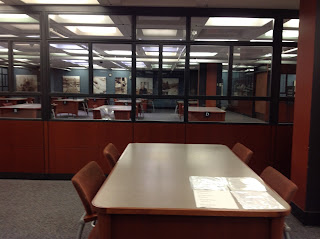 This past December, I had the opportunity to look through a bound atlas of maps of the Wallumschack Patent along the upper Hudson River coming out of the 16 January 1791 deed of partition. These were not the original maps. But rather it is, a late 19th century copy of them. The maps show the lines and divisions of lots in what is now Washington County and across the border in Vermont. Not much information found, except there is that detail of Lot 12. What is that name just north of where Little White Creek runs through? Why, yes it does say “Seth Chase.” Seth, better known in my research as “grandpa times 5,” was a Loyalist at one time, but remained after the Revolution. He ran a tavern somewhere in present day Washington County both before, during and after the Revolution. Did I say somewhere? I think that house symbol in the corner of the property might give a clue. Comparing this map with a present day, we can tell almost exactly where that tavern stood!

Of course, not everyone can find a direct ancestor listed on a map, but you never know what you might find that is either direct or indirect information about your New York ancestors if you explore the archives

Posted by Nancy Ward Remling at 11:53 AM